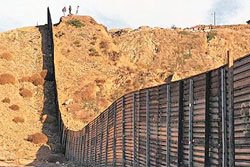 "THERE was a wall. It did not look important. It was built of uncut rocks roughly mortared. An adult could look righ over it, and even a child could climb it. Where it crossed the roadway, instead of having a gate it degenerated into mere geometry, a line, an idea of boudary. But the idea was real. It was important. For seven generations there had been nothing in the world more important than that wall.
Like all walls it was ambigous, two-faced. What was inside it and what was outside it depend upon which side of it you were.
Looked at from one side, the wall enclosed a barren sixty-acre field called the ... it had no gardens, no children; plainly nobody lived there or was even meant to stay there long. It was in fact quarantine. The wall shut in not only the landing field but also the ships that came down out of space, and the men that came on the ships, and the worlds they came from, the rest of the universe. It enclosed the universe, leaving Anarres outside, free.Looked at from the other side, the wall enclosed Anarres: the whole planet was inside it, a great prison camp, cut off from other worlds and other men, in quarantine…"
Le Guin, Ursula K.. The dispossessed (Excerpt from chapter 1 )
Por Sonia Tejada at 6:03 p. m.