Amnesty in the twilight of human rights and imperialism 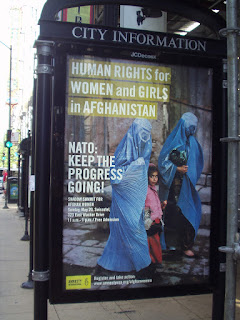 I have been a supporter of Amnesty International for years, because I care deeply about the causes it promotes. However, I find myself at odds supporting an organization that condones military intervention as a mean of advancing human rights. I am unequivocally opposed to all wars, because there are no good wars. I reject all forms of imperialism, colonization and oppression of foreign nations.

This past week, Amnesty came under fire for a poster it displayed, urging NATO to safeguard women's rights in Afghanistan.The poster reads, NATO: Keep the Progress Going. I saw the poster and my blood started to boil, because NATO and progress should not be in the same sentence.

It's an insult that Amnesty is asking NATO to safeguard the progress made on women’s rights in Afghanistan, when NATO has been assassinating their children, fathers and brothers for the past ten years. Is that the progress Amnesty wants NATO to preserve? I think that Afghan women deserve better.

I tweeted about my outrage over the poster, and Amnesty replied to my tweets, but I wasn't convinced by its arguments. Furthermore, the poster crystallized what I've been already suspecting: Amnesty seems to believe that the end justifies the means, and that military intervention is acceptable under some circumstances. I disagree with that notion.

To add to my discontent with Amnesty, I just read the entry it published yesterday: “Failure Is Not an Option." In this entry Amnesty laments the lack of action by the United Nation Security Council:


Even the United Nations Security Council, which is supposed to be the bulwark of global peace and security, has failed in its response to these popular uprisings, especially in the Middle East and North Africa. The Security Council’s ramparts have been thinly manned, its response to cries for help too often feeble. Inaction over Syria has left the Council seeming woefully unfit for its primary purpose: maintaining international peace

When I read those statements, I am forced to conclude that Amnesty supports an UNSC resolution to answer “the cries for help” coming out from various nations, especially from Syria. The problem is that Amnesty seems to forget that every time the UNSC passes a resolution "to help", it results in the bombing of that nation. The latest example of such help is Libya. Thousands of people were killed in that humanitarian and merciful bombing at the hands of NATO and the US.

If it were up to Amnesty, Syria would have been yet another country destroyed by the military power of the United States and NATO. Fortunately, China and Russia vetoed the resolution that would have opened the doors to another war. I am not naive, and therefore, I know that both countries had their hidden agendas in vetoing the resolution, but at least, as of today there are no NATO’s bombs falling on children from the sky. That's how I see it, but here is what Amnesty has to say about the veto:


In the case of Syria, Russian and Chinese intransigence has put the credibility of the Council at risk; undermining its core function as a guardian of human rights, and rendering accountability for crimes against humanity elusive.

China, resolutely opposed to intervention in the internal affairs of other states, except when it suits Beijing, has not exactly been a profile in courage. China appears stubbornly committed to preventing the Council from acting decisively to quell the violence.

The Council is not the “guardian of human rights” but rather a tool at the disposal of imperialists, to legitimize their invasion of nations for economic or geopolitics maneuvering. That's what the UNSC does. I applaud China and Russia for standing up to the US and its European allies, and for having avoided yet another war. I do recognize, however, that none of the two nations vetoed the resolution out of kindness. I know they have their own economic interests to preserve, but at least, they prevented shedding more innocent blood at the hand of imperialists whose thirst for power will never be satisfied.
Por Sonia Tejada at 7:14 a. m.